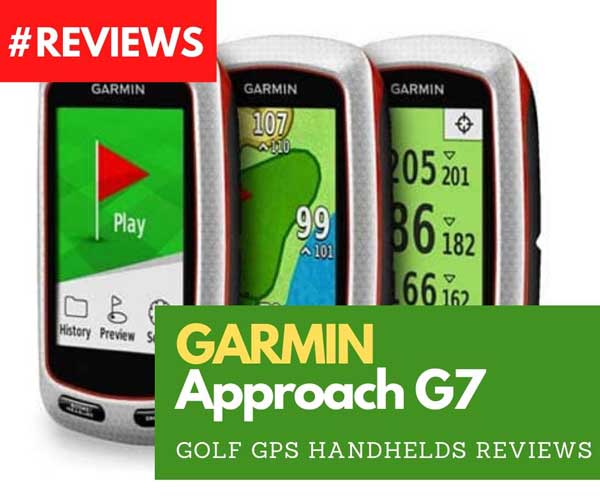 Garmin Approach G7 Golf Course GPS marked the beginning of an era. It is the first golf GPS to show slope-adjusted distances. If you can keep up with wired updates, the Garmin G7 golf GPS is the brightest, most effective golf training tool.

Garmin Approach G7 golf GPS is a handheld miracle that bridged the only gap between the performance of golf GPS and laser rangefinders. It is slightly smaller than the big brother Garmin G8.

The transflective color touchscreen of 160×240 resolution. It weighs a meager 3.37 ounce, much less than a laser device.

It is IPX7-rated waterproof, so it can be dunked in up to 1m water for up to 30 mins continuously without damage. If you are caught in a sudden downpour, that will give you time to run and take cover.

That’s what Garmin calls the slope-oriented distance. If the target is uphill or downhill, the G7 gives you distance counting in this elevation. This is given along with the regular yardage. Of course, this questions its usability in golf tournaments.

As long as Local Rule, applies and you switch off the PlaysLike distances, Garmin claims you can use the G7 in tournaments. But we would confirm this from the tournament committee if we were you.

Garmin Approach G7 tracks the distances you hit with each club in the past. Based on average club distances, it makes a club recommendations for the upcoming shots.

However, Club Advice is again, a prohibited feature. So you will have to turn it off during a tournament and ask the tournament committee for advice on G7’s usability.

A very useful and interesting feature that makes an appearance in Garmin G7 as well as the Big Numbers mode. If you sometimes have to strain your eyes to read distances on the touchscreen, you can switch to this model.

It will give you the center, front and back yardages to the greens in a text-only form. The numbers are very easy to read in this view.

The G7 can maintain the scores for you and up to 3 other players at a time. Basic metrics like putts, fairway hits, Greens In Regulations, etc. are also maintained.

Round performance can be either viewed on the device or on a connected phone/PC.

Scores and statistics functionality in the golf watches can be more of a formality than really useful features.

The accuracy of yardages to the center, front, and back of the greens is similar to most other golf GPS devices. You can touch any point on the map and get the distance, hazards, doglegs, layup arcs, etc.

But there are some course details which have not been covered in the course maps. This could surprise you when are depending on Garmin’s brand value

Being a handheld device itself, the Garmin Approach G7 channels the notifications from your phone so that you don’t have to carry both on your person.

However, you can’t expand and read the entire mail body on the screen, something that would have been practical at this price-point and size.

1. How to setup for Garmin Approach G7

The setup is fairly easy. You need to enter the estimated club distances of at least 3 clubs at the beginning. The G7 will infer the rest if you choose.

2. Is it Tournament Legal?

You are wondering why you should opt for the Garmin G7 when the G8 and G30 have debuted in full glory?  Because the G8 costs a whole lot more for two features, one of which is again barred in the tournaments.

Yes, G7 is the first golf GPS device to offer the feature that adjusts the shot distances based on uphill and downhill shots.

5. How waterproof is the Garmin G7 device?

Garmin Approach G7 is waterproof with standardized water ratings. To find out how to use this device in an optimal way, please check http://www.garmin.com/en-US/legal/waterrating

Garmin Approach G7 has an inbuilt golf course mapping called CouseView, which has more than 30,000 golf courses worldwide. And a new update is released by Garmin every 3 months. After you connect the Garmin Approach G7 GPS device to your computer, download Garmin Express and launch it. Then follow the onscreen instructions to update the software. Later eject it and use the updated device.

The Garmin Approach G7 golf GPS device is one of the smartest gadgets in the market today, perfectly juggling price, features, and usability. It is a tailored down version of the renowned G8, cutting down on the luxury features only. Its highly agile touchscreen eases down the usage. Its yardages, scoring, and metrics are elaborate if not completely comprehensive. There’s work to be done in the areas of scorecard and course maps, but we are just nitpicking here.

I hope this buying guide about the Garmin Approach G7 Golf Course GPS Reviews is useful.