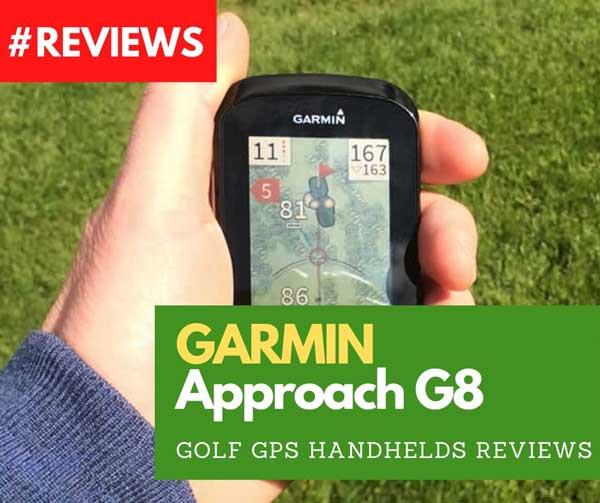 Our Garmin g8 reviews will give you slope-adjusted distances, it’s the size of a yesteryear smartphone. It has plenty of assisting features for finding yardages, the main ones, hazards, and even the layup distances, a digital scorecard Garmin. Approach G8 has all the bells and whistles that you expect from a Garmin product. It’s not always as reliable as a laser rangefinder, but it comes close.

Garmin Approach G8 golf GPS makes you nostalgic about the thick smartphones that sleek iPhones and classy Android phones replaced. It is much handier than the laser rangefinders. You feel like you went back in time and are carrying a cell phone of that era. Apart from the screen, it has two navigation buttons at the bottom.

One of the prime features that Garmin uses to market G8 golf GPS is the slope-adjusted distance. Before Garmin Approach G7, this feature could only be found in laser rangefinders. Called PlaysLike distances, these figures pop up right next to other distances. You can turn this feature off. There’s an off-chance, you might be allowed with Garmin G8 into a tournament with this feature off. But it’s most likely not possible. It’s best to confirm this from the competition committee.

Distances to the front, center, and back of the greens, hazards, and doglegs are readily available on Garmin Approach G8. You can also increase the font size of the main yardages to read them at a glance. Layup arcs of 100, 150, 200, and 250 yards are displayed so that you can plan a safe maneuver to get across the hazard.

This feature of the Garmin Approach G8 golf GPS allows you to have virtual eyes. Whenever you are taking a blind shot, you can use the PinPointer to show you the direction to the center of the green. It is not always spot-on but you get an estimate.

Another feature of Garmin Approach G8 golf GPS that takes away half the complexity of the game is Club Advice. You enter the club distances and lo, behold! Garmin G8 gives you the club down to an iron number. This is another reason this device is too fancy to be tournament legal. If you are looking for similar features without the slope-adjustment, check out the Garmin Approach G6.

Garmin Approach G8 comes equipped with a digital scorecard that can keep track of up to 4 players. The operation is not the easiest. There are numerous button presses and you are required to enter the score for every hole. This can be tedious. You can either view the statistics on the G8, your PC, or on the Garmin Connect portal. This is also a front to share your scores and learn how others are playing.

How to Use of Garmin Approach G8?

The responsiveness of the screen is something we liked in the Garmin Approach G8 golf GPS device. Though not exactly the iPhone 7, it is agile and fulfills your requests pretty fast. It has two views, the hole view, and the view of the green. The green view shows the graphic of the greens and the hazard around. You can move the flag around the greens. Hole view displays the graphics around the hole. It readjusts when the flagstick is moved in the green view.

You can get 15 hours of life out of Garmin Approach G8 per charge. It comes with a USB cable, AC adapter, and a belt clip to attach it to your waist strap.

You can connect the Garmin Approach G8 golf GPS to your smartphone via Bluetooth. You can route your emails, texts and other alerts from iPhone. It has to be a newer version than iPhone 4S. This is nifty if you are the type who wants to stay connected to the outside world in anticipation of an important text. However, most people like to get away from their work when they golf.

The Garmin Approach G8 handheld golf GPS is accurate within 5-6 yards most of the time. But if you are playing in a newly-changed small golf course, it might not be updated in the master database. On such occasions, the yardages could be way off.

The shot distance can be measured by two button presses. Not only does Garmin Approach G8 allow you to note this figure, but it also makes you relate them with clubs to measure club averages. This information is reused when you get club advice.

The shot distance can be measured by two button presses. Not only does Garmin Approach G8 allow you to note this figure, but it also makes you relate them with clubs to measure club averages. This information is reused when you get club advice.

We were impressed with Garmin Approach G8’s slew of features like PlaysLike, PinPointer, Club Advice. It has a tactile advantage when we use it. The screen responded quickly to our prodding. The distances are fairly easy to find and accurate to a large extent.

So if you can make good use of the extra features, the Garmin Approach G8 golf GPS is right down your alley. Do you like our Garmin g8 reviews?