HOME » How to hit a Hybrid off the tee: Struggling to hit hybrid

It’s time you embrace and exploit this change to take your game up a few levels by learning how to hit a hybrid club.

Hybrid golf clubs are rightfully called the ‘rescue clubs’. These hybrids between irons and fairway woods use the advantage of both the clubs to get the ball smoothly to the green.

They fly like irons and come to a controlled stop, all the while, being as easy and responsive to hit as the fairway woods. But this dual personality is why golfers get confused about how to hit a hybrid club. And the faulty assumptions cost them multiple strokes on the greens. The fact that hybrid clubs are more inclined towards irons in behavior makes the concept easier to understand.

Difference between a hybrid and a fairway wood

Before we explain the swing technique for hitting hybrids, you must understand what a hybrid golf club is and how it arrives at its advantages. While designing a hybrid, the aim was to combine the ball flight mechanics of a golf iron with the lenient and easy-to-hit nature of the woods.

They are designed with a large head which is larger than the clubheads of irons but smaller than that of woods. So you are able to connect the ball to the sweet spot of hybrids much more consistently.

But hybrid clubheads also introduce more backspin in the ball than fairway woods. The result is a shot that lands softer and rolls less, even compared to irons.

The wide sole of hybrids makes it easy to get the ball airborne compared to the irons. The loft of hybrids is greater than the irons of the same number. So that’s how hybrids bring the best of both worlds together.

When to use Hybrids

Use hybrids judiciously. Just because they can replace two families of clubs does not mean they can be used anywhere and everywhere.

Hybrid clubs are used when you want the ball to be launched at a high angle(compared to long irons) but want it to land softly and arrest its movement within a few yards of the landing.

You can hit a hybrid from the fairway, tee, or from the rough. You can use it to chip a shot when you are close to the greens.

How to hit a Hybrid Golf Club?

The key to hitting a hybrid golf club is to swing it like the irons. Hybrids are primarily built to behave like irons. In fact, there are few manufacturers who produce ‘true hybrids’.

Hybrid clubs are usually used to replace golf irons or fairway woods. So you can buy your hybrids based on the following chart

We suggest you replace 2-4 irons because these are the most grueling to hit. 2-irons are obsolete, so 3- and 4-irons are the obvious candidates for a change. Here’s another chart to help you buy the hybrid clubs based on the loft you need:

Tee is again optional. But it’s a useful tool for learning the correct swing to hit a hybrid. We will explain a simple drill involving a tee later in the post.

The rest just add somebody to the clubhead of irons and sell them as hybrids. But these also improve the performance of the slow swingers. They slow down the swing but make a harder impact on the ball with higher energy because of the clubhead weight.

Here’s how hybrid clubs should be hit:

Due to the wide sole of the hybrid clubs, they have a low Center of Gravity(CG). While this makes them more forgiving, the CG must go under the ball to launch it high.

With the hybrid clubs, you can see their lofts at address, which renews your faith in their performance.

Here are a few simple and genius drills that will help you strengthen your hybrid swing:

Another easy drill is to practice with a tee. Drill the tee down till only its top peeks out. It must be almost level with the ground.

You can also sink two tees 1-2 inches from each other. Set up the ball on the tee farther back in the stance and swing. You must aim at dislodging/breaking both tees. This will ensure that you hit the ground right after the first tee. Here’s what the setup looks like. 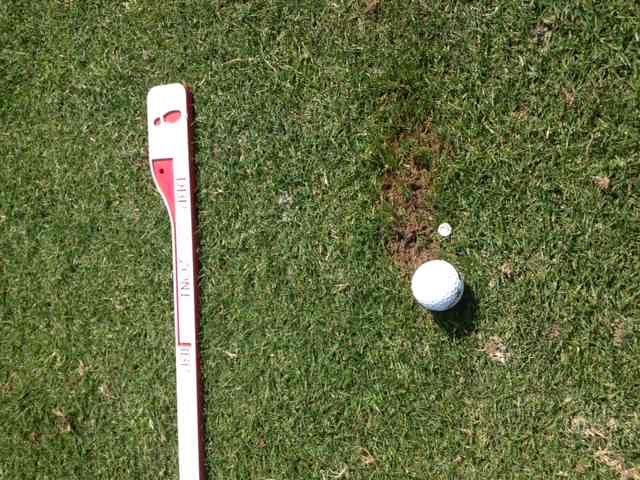 If you ask 2 golfers about their swings, they will have 3 different opinions between them. But almost all golfers agree on how to hit the hybrid golf clubs.