The customer-oriented price tag made us wonder if it could actually deliver on all its promises. So we delved deep into the features of Precision Pro Golf Nexus laser rangefinder. 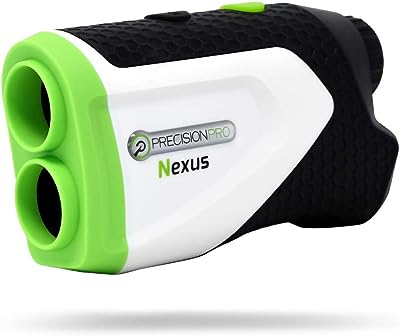 In spite of the price, the Precision Pro Nexus does not feel inexpensive in your hands. This is a substantial piece of equipment. The plastic refuses to cave under a strong grip. The shock-proof casing can take some trips and falls.

The parts where you wrap your fingers are covered in a grippy material with honeycomb pattern to make it more tactile and prevent slips.

There’s a curve under the rangefinder which easily nestles your thumb while holding it. The color scheme is pretty attractive between black, white, and green.

Some users of Nikon Coolshot 20 argued that while it’s very compact and easy to carry between rounds, it’s unwieldy while aiming. The small size tends to slip out of your fingers.

The Precision Pro Nexus is moderately sized and weighted at 7.5 ounces. It is light and compact enough to be highly portable but not so much that it’s hard to focus. It is much sleeker than the Latitude which needed both hands to balance.

The complete operation of Nexus laser rangefinder pivots on just two buttons. One is the power button which switches it on and starts acquiring the target. The other is a mode button which lets you toggle between advanced target mode/Scan mode and also between yards/meters.

This laser rangefinder is water-resistant in that it can stand small splashes of water. But we wouldn’t take it out on a rainy day.

The Precision Pro Nexus laser rangefinder can range up to a maximum distance of 400 yards. This is sufficient as even the most powerful golfers hit within 400 yards in a single swing.

The distances are shown in increments of 1/10th yards as opposed to Nikon Coolshot 20 which shows 1-yard increments.

The Nexus laser rangefinder is accurate up to +/-1 yard. This is the standard for laser rangefinders in this price range. It is also as fast as rangefinders twice the price. We checked it against some advanced Bushnell lasers and these clocked around the same time to tell distances.

This function is much like the Pinseeker of Bushnell. In this mode, just press the button and voila! You’ll have the distance in around 1s.

When the target is acquired, a flag sign flashes on the screen. This is a stable confirmed distance to the nearest object you scoped(eg: flag).

The stabilized distance also gives you more confidence that you have a confirmed target distance. Butterfinger golfers will find this Target lock function very useful to find correct distances.

This is another mode of the Precision Pro Nexus laser rangefinder. In the DST mode, you can pan through the horizon and quickly get distances as you scan from target to target.

It is useful when you are trying to formulate a game strategy and want distances to a number of objects.

While Nikon Coolshot 20 offers DST, it does not offer the exact Pinseeker function. At the same price, the Nexus is a better bargain.

The lens of the Nexus laser rangefinder offers 6x magnification with a focus on the eyepiece. While the magnification is excellent, the resolution is not the same as higher-end models.

You have to adjust the reticule to get a clear image. And you might find yourself doing this often if you need the startling clarity of higher-end lasers.

That being said, the focus is easy to operate. The clarity is good for the price.

The Precision Pro Nexus laser rangefinder has a 3V CR2 battery that can be recharged. The charge stays for months of regular use. There’s no issue removing or replacing the battery.

The Precision Pro Golf Nexus is one of the easiest laser rangefinders we have tried.

The Advanced target lock is an impressive feature on a unit of this price. This helps the people with unstable grip to get instant distances.

Between the two target modes, the Nexus laser rangefinder provides to all normal ranging needs. Except for the depth of focus, the targeting viewing and acquiring functions are fast, accurate, and easy.

The laser arrangement might be the only place that Nexus cuts costs. But that doesn’t stop it from finding accurate distances or displaying the flag correctly.

The Precision Pro golf Nexus laser rangefinder has received very positively by the golf community. The ease of operation and the piece earned it wide interest.

At 80% of the people were satisfied by the speed and accuracy with which the Nexus captured distances to the flag. It might feel a little slower than the golf GPS devices and the advanced laser rangefinders.

There aren’t any coherent complaints against the device which is testimony to how much value it brings for the money. The major reviewers have all lauded the Precision Pro Nexus for being sophisticated enough without jacking up the price tag.