HOME » Square to Square Golf Swing: What is all the Hype about? 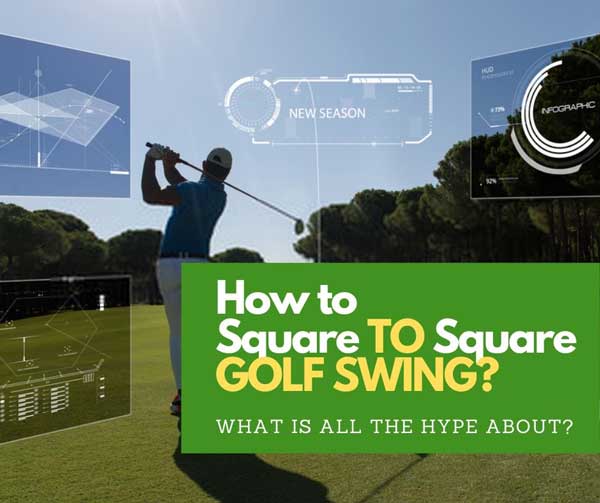 The Square to Square golf swing (S2S) is one such technique that has kicked up dust in the golfing circles. Not only do the proponents claim that you will be hitting the golf ball straighter and further, but they also say it’s easier to the body.

Golf swings are repetitive actions and can leave irreversible damage on your body if done wrong. So we were interested in learning this new trick.

How to hit a square-to-square golf swing?

We also heard that golfers over 50 have found hitherto unseen success with this golf swing. They say that it reduces the neck and back pain they used to experience with the modern swing techniques. You’ll see that there’s no mystery to the square-to-square swing. It’s just the ‘magic pill’ status it has been given that makes sensible golfers skeptical.​

The square-to-square golf swing was first pushed to limelight by the golfer Jim Flick in the 70s. This swing action required some unorthodox movements compared to the contemporary swing techniques then. So although Flick got great results out of it, it didn’t catch on with the rest of the golfers.

Eventually, all word about this golf technique died down and people kept using the big windmill swing. This swing is taxing on the body because you are required to rotate your shoulders completely while wrapping the arms around your head. This causes strain in the neck and back muscles.

Specifically, if you have pre-existing physical constraints, you are at a higher risk of injury with the modern golf swing. Most of the veteran golfers have had some history of injury. Which is why the square-to-square golf swing technique is an out for them.

Doug Tewell, a 12-time PGA winner explains how he would have had to give up golf after a grave elbow injury. He found his solution in the S2S swing which allowed him not just to play golf but also beat the best golfers out there 8 more times.

Many websites have bottled this square-to-square golf swing like some magic potion. They aim to sell it to you by convincing you with great stories of personal enlightenment. Some of them initially offer free registration and then ask you to pay for the ‘ultimate secret’.

If you decide to loosen the purse strings, do so at your own risk.

To understand the square-to-square golf swing, you must first be sure what a square clubface is. The square clubhead position is when its face is at exactly 90° to the target line.

This position at address and impact ensures that the golf ball takes flight across a straight line and covers more distance along that line.

The modern swing makes us rotate our shoulders and cock our wrist in a controlled manner. So much so that halfway up the backswing, the toe of your clubhead will be pointing upwards in the air. Modern swings see more of wrist and body rotation.

These are the steps involved in the S2S golf swing: 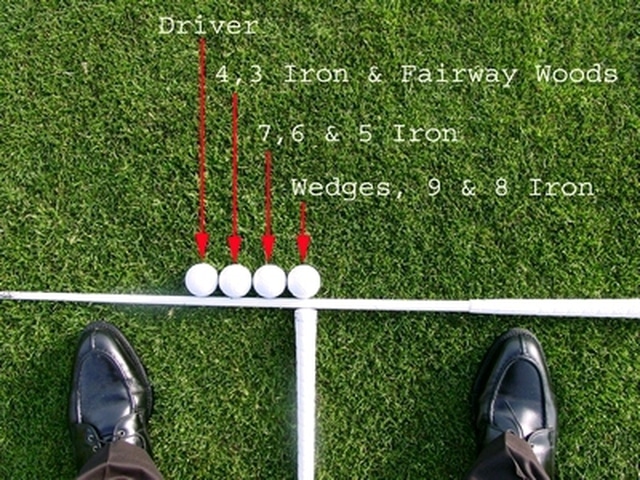 Assuming you are practicing the square-to-square golf swing with a long iron, the ball should be placed in the middle of the stance. The swing arc ideally bottoms out right after the impact taking a divot around 4 inches after the ball position. The ball should be struck at the downswing with the irons.

In the usual address pose, you position your hands exactly on top of the ball. But if you look at some of the tour players, you will notice that they tend to preset the impact position. They weigh slightly towards the left and flatten their left wrist.

This pulls the hands a little forward such that it’s positioned about 3-4 inches ahead of the ball of the target line. 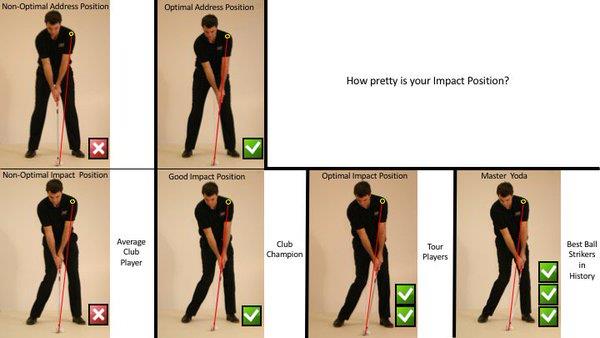 This presetting simplifies the backswing and it reduces the need to do a full shoulder turn at the top of the backswing. The clubhead remains positioned behind the ball. So essentially you will be holding the club slightly slanted from the vertical line.

This is the crucial part. In the square-to-square golf swing, you must keep the clubhead square or slightly closed up to at least half of the backswing.

That is until the clubhead crosses the level of your knees its face should remain square or slightly closed instead of toe pointing completely up. Check out the video below to see how this technique can be incorporated in your swing.

It’s anatomically difficult to keep the clubface square more than half of the backswing.

After the bottom half of the backswing, let your swing take the natural course, i.e. with the toe of the clubhead pointed upwards. You will see that shoulders need only turn 3/4th of the complete arc in S2S.

At the top of the backswing arc, the edge of the clubface should be parallel to your left forearm (for a right-handed golfer). Sarah Pesavento demonstrates this properly in the video above.​

The downswing is also crucial. In its lower half, the clubface should again remain square throughout the impact and follow-through.

Differences Between Modern Swing And S2S

The major differences between the square-to-square golf swing and modern swing are:

The square-to-square swing technique has many benefits as reported by the people who could successfully learn and follow it:

It exerts less stress on the body compared to the big windmill swings where the arms wrap around to the back of the head. This wrapping action can cause joint pain and rotator cuff tear. Imagine how many times you repeat the action per round of golf and then how many rounds you get each week.

On the other hand, the square-to-square technique involves less body rotation and feels better for the shoulders, neck, and back.

Since the club remains square longer, you hit the golf ball at the sweet spot more often. This makes your shot more consistent. If you know your swing is dependable, you deal with the stress of the tournament better. It gives you confidence in your capabilities.

Hitting the golf ball at the sweet spot consistently sends the ball flying straight in a burst of energy. If you practice with the driver, you will be shaving off strokes from the tee and fairways.

You don’t have to deal with the whole ‘timing’ conundrum of the modern swing. Since the clubface is square mostly through the swing, you tend to hit straight and long anyway.

Due to the less stress from repeated S2S swings, the senior and injured golf players are finding this technique much more useful. It prevents further damage and allows them to perform to their full potential.

One of the most noticeable characteristics of the square-to-square golf swing is the minimal body movement. To people who are used to lavish flourishes with their golf club, this is a very restricted and controlled movement. You just rock your shoulder for the most part.

The witnesses who have seen the S2S swing in play will falsely infer that there’s no wrist movement involved and the swing is just a body turn.

The prime example they quote is Steve Stricker. He has one of the most consistent hits and ranks top ten in fairway hits and greens-in-regulation. If you notice him, he does cock his wrist but he avoids rotating them.

Check out the video below:

Square-to-Square swing technique is a new golf swing on the block. It has been rejected once in the past but it’s back with a bang. It’s up to you to try it out and see if it works for you. But we suggest that you carefully watch the videos here and work with a coach to get the swing right. Only once you have gotten the swing right should you decide whether it works for you or not. Square-to-square swing involves: